Inside out and outside in

Take a square paper and fold it in the middle twice on all sides.
Also fold it over both diagonals.
Fold each side to touch the first third of the inner section.
Now build the box. 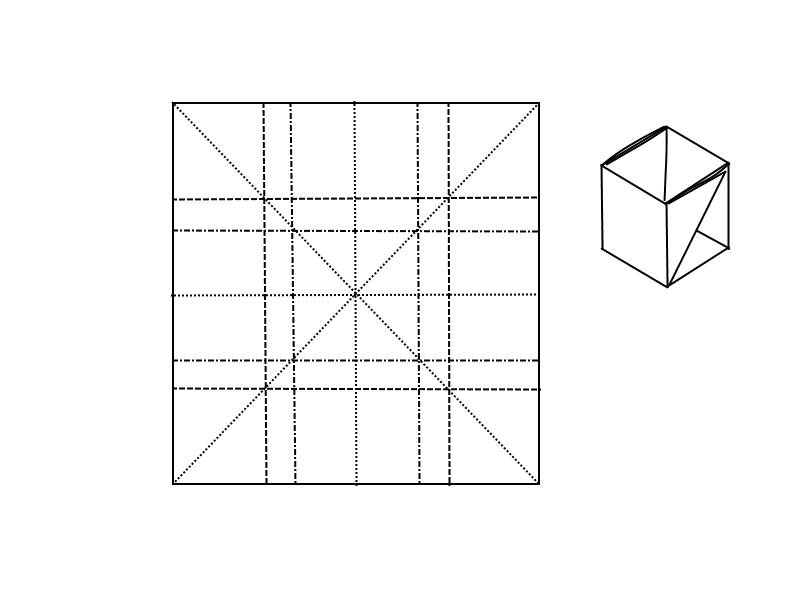 How to fold a box

The DaDa movement was a(n re)action to the self destruction of the world’s societies in the First World War, the mini petty bourgeois of Switzerland and a reflection on popular (dis)belief of social fairness and stability though the current situation is in it’s best only as close as possible or like in the dawn of the First World War fragile.

Peace was and is and will be the status with the meaning of no war: here. But it does not mean neccessily nowhere else or us not involved somewhere else.

DaDa was a happening in the Züricher Spiegelgasse - Lenin was only some houses away. It was (not) a(n) (r)evolution. [1]

DaDa can be seen as the ancestor of surrealism. It was both logical destructive, playful, subversive and constructive, composing, gambling with the (un)conscious. For example in the DaDa movement the technique of mechanical automatic writing has been (re)invented. A technique which was used and recommended in the surrealists movement to explore the unconscious territories of ones mind(set).

In reverse order I mention the two movements of super realism, which both focused towards the inner reality of human beings, not their nature and not nature at all. One explores the possibilities more than the other, which enjoyed the impossibilities instead.
DaDa was more hyper unlike trying to being super. [2]

Suprematism introduced radical abstraction if not to say concrete shapes and pure composition to the modern art, conquering the dominance of the social circumstance and the literature during the revolution.
Surrealism was a literature movement first, in want for other arts to participate.
Once this movement art became multidisciplinary a lot of experiments had been made across the arts. Like creating games. Thinking about things on wires.

From DaDa over Surrealism to Abstract Expressionism

Colour fields had been introduced by suprematism (Rodchenko), as well as DaDa (anyone who worked ‘abstract’) and even with the poetic surrealism paintings (Miro). You can find strong relations between early Alberto Giacometti’s outdoor works and Barnett Newmann’s paintings and sculptures.

But before what is expressionism - ‘colour field’ paintings - and what’s impressionism? Monet’s sea-roses - the First World War memorial - the endless ocean of colours and opportunities versus the flat one colour surface, which expresses the current emotional state of the artist on this topic → a car, the river, the banks…

From the (late) medieval period over the early Renaissance artist tried to figure out environmental space in images. They used prospects, the bycantinica (inverse perspective) and at least perspective, carefully constructed perspective. The three High Arts (Math, Philosophy, Architecture) and the seven virtues of an educated man defined the mental ambitions of those times. Although the Classic Greek were masters of perspective, we can still see it in their temple architecture, the whole antique never came up with a representation of perspective in painting. In Greek and Roman wall-paintings the main focus is the person, the objective. If it has been drawn in a right perspective, each object carried it’s own point of view. Space was part of the narrative context. Perspective had been a technique of ‘engineering’, for buildings, and only became widely used during the Renaissance in paintings.

From now on space has been traded as natural, although the deal of representing social orders had survived. Both for interior box-views and exterior overviews, landscapes, etc. Until Velasquez. Until the early English romantics.

Two breaks of the rules: one with the social rules of representation the meaning of persons, the other one pure documentation - the prediction of photography.

Prespective is an architectural phenomenon but also a social emotional one, if you use the prospect of meaning.
Picture normally have a reading direction like a text, even if the picture is organized by perspective techniques. The objectives present a meaningful value, a common tacit consent for the social environment.

Narrative Space. Envision of (Evocative) Narration (‘s|in) space - it is not narration of space - tale telling how a space aka room, landscape, building would look like, more alike instead, and even more: landscraft(ing), which is using the space of a landscape situation to create a (parallel) storyline(s).

http://www.narrativespace.com/narrative/descriptions.html
http://www.narrativespace.com/narrative/termsdefined.html
http://dramaticapedia.com/2012/01/06/narrative-space/
“Narrative Space” describes the complete breadth and depth of subject matter in which you seek to define a story.
In literature:
A mental model of narrative space is a construct held in long-term memory, but it is built from images of individual spatial frames that replace each other in short-term memory. This explains why readers are not always able to situate individual frames within the narrative world.

The serial against the single R.P.Lohse said the square might represent if not symbolize a single individual.
Each square though has different aspects like color and position, so each person
has it’s own needs, and so should be treated equally according to it’s own necessities.

It is the sun, the moon, the half(-moon), the eye, I, the what,where,why,
the whatever, the, a circle

A square is a box, always open, although it wold be interesting if it w|could be closed
The option you can choose, check
The radio, you listen to. Dot.

The Inside Out Vice Versa Paradigm

Rubiks cube is a toy and game implementation of the outside visualization.

If the square is a possible model, representation for a human (being in the society) (R.P.Lohse), a box might be understood as the representation of the narrative space. The open but also limited and restricted multi facets, faces of ideas, knowledge and imagination.

Paperworks is a group of works made from a coloured paper note block of the size 7cm x 7cm.
The main flat area is 2 times 2 papers - 14cm x 14cm - of one or more colors. Other colors had been added by other papers from other blocks.
Commonly a flat open cylinder is attached in to the upper center of the main flat area, in the second half, the bottom part, small (multi-)coloured boxes are placed.
Usually the boxes are grouped (in a line). They approximately have the dimension of 3.5cm x 3.5cm x 3.5cm.

Boxes may ‘view’ to the front, left or right, top or left, depending on their position. A box always shows it’s inner to the viewers space somehow.

Rubiks Cube: Rubik’s Cube is a jigsaw puzzle invented in 1974 by the Hungarian civil engineer and architect Ernő Rubik. In 1980, it was awarded the Best Solitaire Game of the Critics Prize Game of the Year.

Though Rubiks Cube and Katzenjammer can be seen as a graph problem and solved by an applied solution rule, both games were meant as an education game to learn imagination of space. The 4 cubes problem in architecture is an jigsaw. 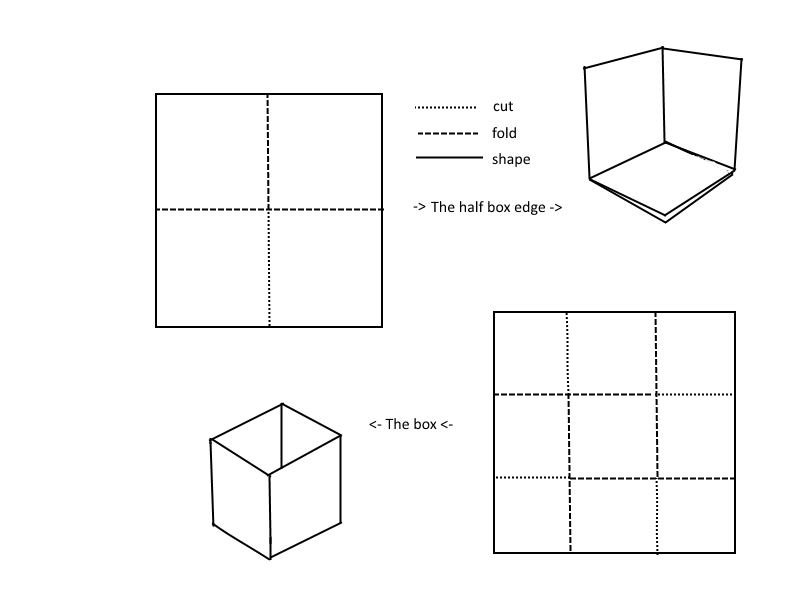 What is the idea behind the Paperworks?

I try to explore the narrative space in ‘imagines’ aka images/pictures.
The value and role of colour in this narrative context. The Influence of light.
The meaning of areas and bodies. A box, the booking, the circle, the cylinder. Dots, lines, shapes.

The mechanics of rules. The order of movement.
It is a system of play, isn’t it?

Even movement does have patterns.
Shadow is the combination of light, time and movement.

[1] The Spiegelgasse is 160m long, or short. The Cabaret Voltaire(Haus DaDa) is still locate at number 1, Lenin lived in house number 14.

[2] Hyper like in hypertext or even in ‘hyper, hyper’.
A super text though would not be a text that is simply super. It would be more than this. It would not need to use common words, not even letters or signs. It is not a draw. It would be the text in it’s purest mental implementation. Not an abstract. A supertext is a concrete writing, nothing conscious or unconscious, no automatic writing, just the writing: the blank page. Do you imagine a white blank page now and here? Could it not be black or any other color? Must it be flat? Could it not be folded? Folded randomly on purpose? It is the representation of the narrative space - the possibilities of your reinvention bonded to your predictions, assumptions, partialities - reality. Super-realism or as we know it suprematism or surrealism.